I believe it was Tuesday when I reported having some issue with my Tormach. You can read about the initial symptoms here. Fortunately, Tormach has very good support, at least in my opinion. I had also let Tormach know the automatic draw bar was not functioning, the lock and release buttons were not doing anything despite having good air pressure, and other air pressure related functions working properly. This led them to believe that the draw bar control board may not be receiving power, which would then affect the ATC, as both are used together during tool changes.

I put a multimeter on the draw bar control board and was not reading any voltage. I traced the wires back to their source at the electrical cabinet and also received not voltage at that point, which suggested perhaps a fuse had blown. However, while looking at the fuse board in the electrical cabinet I did notice a few small chips of aluminum on the board, which might be shorting out the board and causing the issue. I brushed those chips away and retested the wires numbered 501 and 502. 11.92 V showing on the multimeter, problem solved.

Looks like some chips somehow made it into the electrical cabinet and shorted out the fuse board, specifically the 501 and 502 wires to the draw bar control board. It took a day or so to track down the issue, but luckily it was an easy and cheap fix. Some photos below.

Today I’ll talk a little bit about setting up a part for use on our Tormach PCNC 1100 mill. As I said in a previous post, I’m working on a new project for students, creating a custom arduino holder out of aluminum. I’ve been documenting the process of preparing the stock for the mill.

The project as designed in CAD calls for a 0.8 x 2.6 x 3.2 in block of aluminum stock. I’ve cut a .9″ thick piece of stock from a 6 x 4 inch block and then roughed it to down on the bandsaw to get it close to the dimensions I want. Next, I took it over to our Trax mill and faced off all sides until it was milled to the dimensions mentioned above. I probably do not need to be this precise, but its a good exercise, and will give the students a good beginning in using our manual mills.

Once the block was ready I took it over to our Tormach machine and proceeded to zero out the X, Y, and Z coordinates. This is extremely easy using the Heimer – a measuring tool that provides the zero, or edge, coordinate without the user needing to to any math as might be done with a standard edge finder. See video below.

This project requires a part flip, and for the first attempt, I tried using the same X and Y coordinates – which did not work out. Mostly because the Y coordinates did not match on the flip. Another issue I had was tapping the holes. I did not properly set the RPM and feedrate correctly for the 4-40 tap, and it broke immediately. A silly mistake, but one that will be easily fixed next time I run the job.

There are some photos and videos below of the process, although I forgot to take a photo of the finished product. Will update on the project next week. 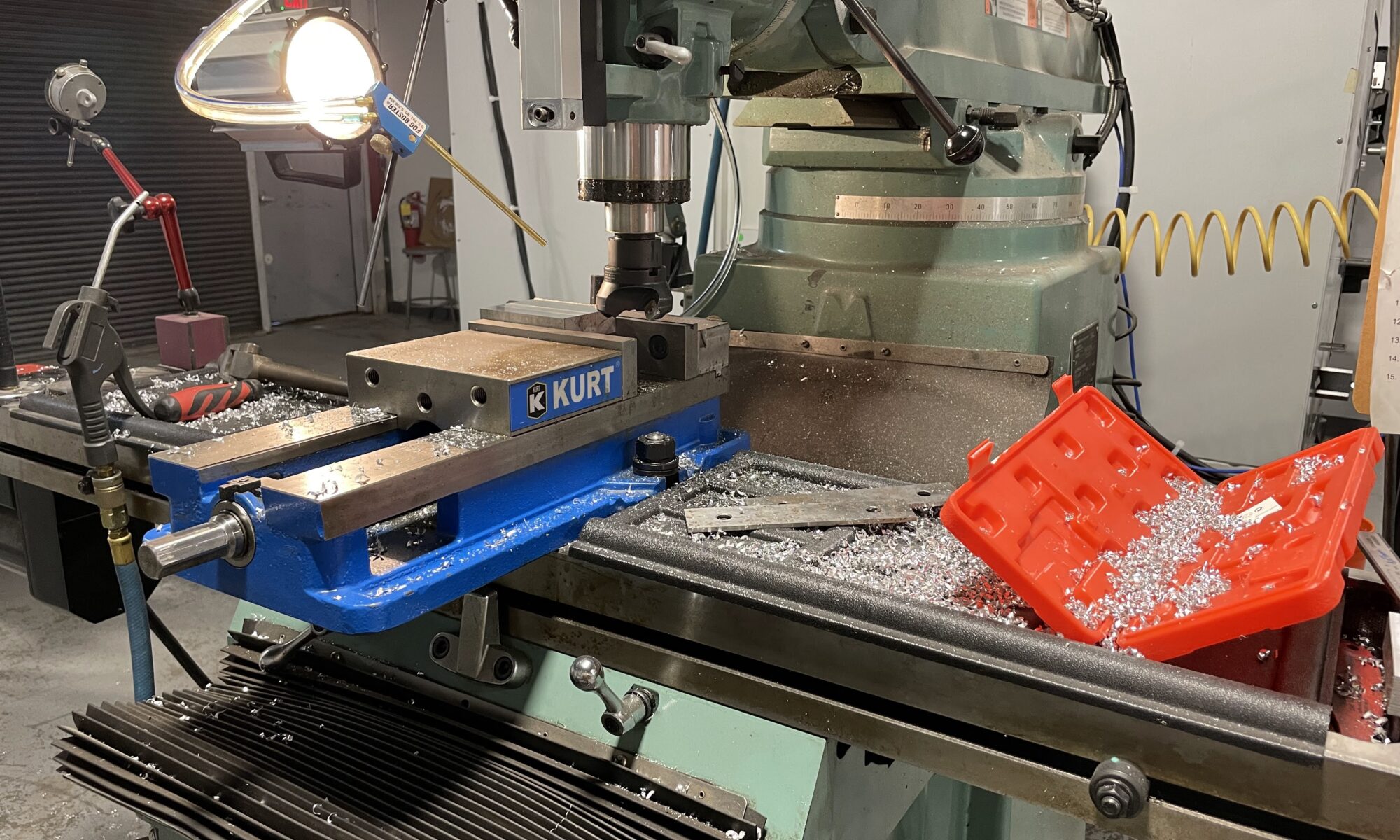 Today I started milling a part that will become a student project. The idea is to have each student learn how to mill their own Arduino holder. The holder allows for easy prototyping, and will give them hands on knowledge of how to use CAD and CAM to to setup a part.

The CAD aspect of the project utilizes a spec sheet in order to get mounting hole dimensions for the Arduino. Students will learn how to import a canvas into Fusion 360 and calibrate the canvas to the correct size. Next, students can build their holder directly on the canvas. Additionally, the CAD project requires importing components from McMaster Carr, and then using the CAM features of Fusion 360 to create the tool paths on two sides of the part. Lastly, the holder requires a laser cut top. Here is an image of the project below.

I was able to setup the CAM today and began cutting stock to size. This process started with making 3 cuts on our vertical bandsaw to a large piece of aluminum stock and then placing the stock on our Trax mill to get more precise with the stock dimensions. I am looking for a stock size of 3.2 x 2.6 x 0.8 inches.  Below are some images of cutting the stock. 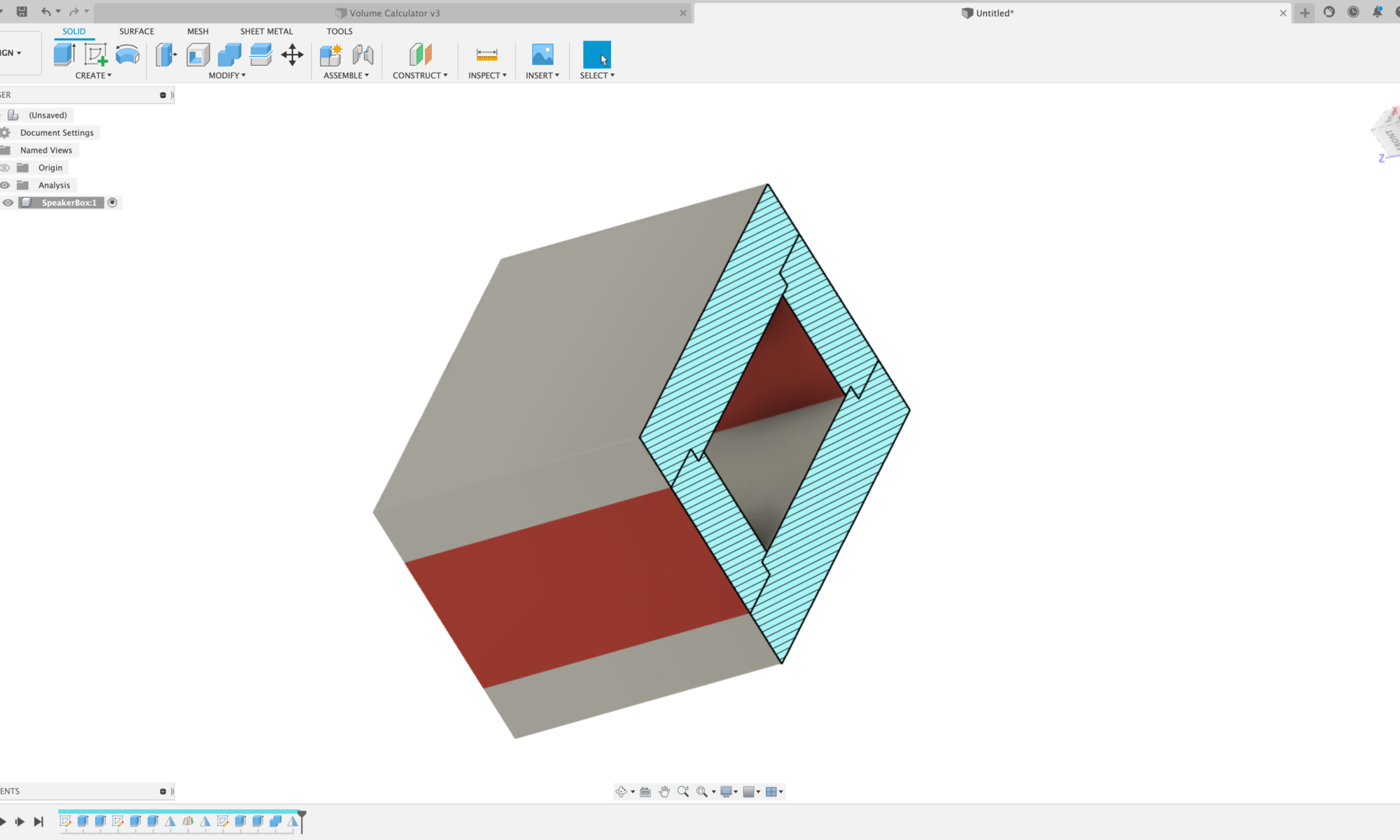 One of my favorite aspects of my job is solving a problem we have never before encountered. Luckily, this happens nearly every day as students are building various types of projects of their own design, such as candy shooters and singing toothbrushes.

A senior was having problems building a box for a bluetooth speaker setup they were working on, as they were trying to understand how to build the box with the proper volume specified for the speakers he was using. He was taking measurements, putting them into CAD, but when things changed within his project, he would have to change all his dimensions again and it was a real tedious task.

Working together we were able to solve the problem using parameters in Fusion 360. We utilize Fusion 360 for all our CAD needs in the classroom. It’s an easy to learn, robust software with built-in CAM that enables us to send our models to all the different machines we have in the shop – 3D printers, waterjet, plasma cutter, mills, lathes, etc. It’s also free software, and I have the ability to setup an educational account and give access to all my students, rather than having each student setup their own personal account. I really like the way they have the new educational account setup for teachers and students, makes life much easier than before where students needed to verify their accounts which was often problematic.

Back to the parameters discussion. By utilizing parameters in Fusion 360 along with an organized modeling strategy, we found a way to control the volume of the box so it always remains constant, even when we change the length, width, or size of material. Below is a screenshot of the parameter setup for the project. You’ll notice some odd math happening, as there are several instances of multiplying 1 in within an expression. This is because Fusion 360 does not have in² or in³ within its parameters framework, so you need to use the 1 in to cancel out parts of an expression so it has the same units Fusion 360 can work with.

I went ahead and created a quick modeling video for students, so in the future I can just point them to the video instead of showing them directly, which frees me up to help other students in our classroom. Video below.